Manga touches the lives of every person living in Japan and over the past few decades has spread in popularity to people all over the world, where it continues to grow and be enjoyed. As such, there has been an increasing number of non-Japanese people who have taken an interest in learning the craft. As its birthplace, Japan is the best place in the world to truly learn Manga. The Japanese comic world is vast and highly developed, with various organizations specializing in the production as well as education of all of the aspects of Manga, forming an industry where thousands of professionals make their career. In many cases, educational institutions have ties to the production side, recommending students to publishers, editors and studios. The Japan Study Abroad Network is proud to present this original course to provide efficient training in English in order to fulfill the dreams of non-Japanese people. This short-term manga camp aims to develop your passion and dreams of working in the Manga Industry in the near future.

This intensive Manga Program, curated by DEOW, provides students of all levels with the tools they need to begin creating Japanese Manga on their own. The course takes on a practical, coaching-style approach that emphasizes practise and skill-building in order to develop your abilities and confidence as a manga artist in the short span of 2 weeks.

We also offer a private manga program that you can check here.

Inquire about this school

One-of-a-kind Manga training program
Designed specifically to meet the needs of non-Japanese students interested in Manga. Taught in English by professional Japanese Manga artists.
Covers all aspects of Manga
From planning to drawing, and trains according to your level and style; No experience required.
Small class size
With a maximum of 4 students, this intensive course guarantees that you will have plenty of support so that you can learn as much as possible within just 2 weeks.
Program Director: Tanaka Hirohisa, Author & International Instructor
Coordinator and Teacher of the Manga Animation Course at Sakura International Gakuin since 2009.
Teacher at the Tokyo Game Designer Gakuin since 2003.
Taught Manga courses and workshops abroad.
Adviser of Kadokawa Contents Academy in Taiwan since 2018.
Professor of Doga Gakuin University in China.

The lessons take place in Shinjuku, Tokyo, but students will have the opportunity to visit all sorts of tourist spots and manga-related places during the program.

Tokyo, known previously as Edo, has been one of Japan’s major cities since the Tokugawa Shogunate era. Its famous attractions include Asakusa, Ueno, Shinjuku, Odaiba, Ginza, and Shibuya.

Shibuya, Shinjuku and Ikebukuro are among the top business districts and are major hubs for the city. They are significant hubs for fashion, entertainment and recreation. In these areas, people will find Japan’s major department stores, large shopping malls, restaurants and entertainment centres.

Throughout the program, we will head to the traditional district of Asakusa, checking out the vast market and visiting the temple and shrine; We will head down to the iconic Shibuya crossing and make our way up to Harajuku for a day of fashion and modern culture; And we will cut across the city to the otaku hub of Akihabara to explore specialty manga and other unique shops before entering into the world of a maid café!
Because we are a small group, we are able to adapt the city tour contents to your requests so that we can all get to see and do what most interests us most. Shibuya & Harajuku
Shibuya and Harajuku are among the most well-known places in all of Japan. Many who haven’t even visited these places before may still know a thing or two about them. These areas are said to tbe the hub of young & modern Japanese culture. For starter, Shibuya is where you can find the iconic statue of the infamous dog Hachiko, one of most popular meet-up points for friends, as well as the world famous Shibuya Crossing where every change of the lights signals one of the largest crossings of people in Japan if not the world, sending people in all directions to their desired destinations in the district. Shibuya is also home to several major department stores, the legendary Shibuya 109 fashion store, and nearly all global brands that one can think of. Up the street from Shibuya and within walking distance, is the much hyped Harajuku District, which rightfully conjures images of street fashion, crepe stands, cute and chiq cafes, instragram-famous desserts, one-off fashion shops, art and more! 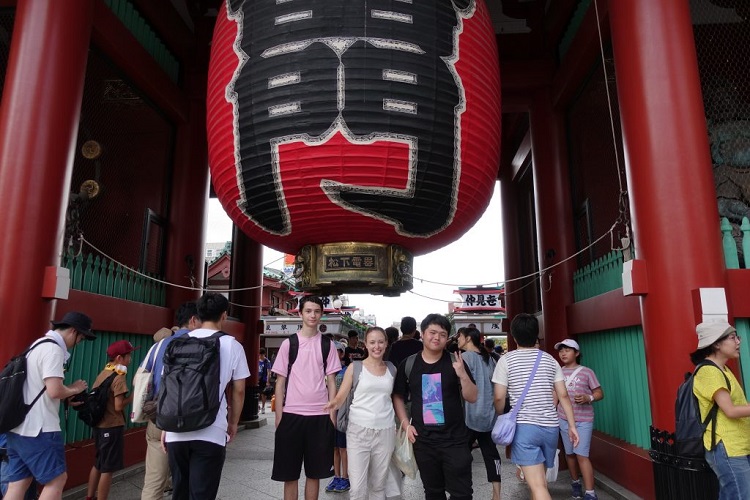 Asakusa
Asakusa remains reminiscent of old Tokyo, highlighted by the ancient Sensoji Temple and the traditional craft shops and food stalls, as well as the Nakamise shopping district. In addition, the area contains the Hanayashiki, Japan’s oldest amusement park complete with rides, eateries and cafes, and Sumida Park, a leisure riverside escape with beautiful views of Tokyo Skytree and a popular venue for big annual firework displays and cherry blossom events.

As for the famous Asakusa Kannon Temple, it is the oldest temple in Tokyo, one of the most popular and lively, and is a symbol not only of the area but of Tokyo itself, making it a must-see destination for every traveller to Japan and Tokyo, including local Japanese people. Entering the temple is through the iconic Kaminarimon, or Thunder Gate, into the traditional market, lined with food and craft stalls to the end of the stretch where lies the famous Temple itself. Every day in this part of Asakusa feels like a matsuri or festival, and is a perfect place to enjoy delicious food in traditional restaurants and casual izakaya, take a ride on a rickshaw, and dress up in a kimono, yukata or happi and host your own personal photoshoot, an everlasting memory of your time in Tokyo. Akihabara
For any fan of anime, manga, cosplay, idol culture, gaming and electronics, Akihabara is the hub of them all, located in the northeast corner of Tokyo’s most densely populated core outlined roughly by the popular circuit route train line known as the JR Yamanote Line operated by Japan Rail. The district contains everything from small one-off shops to large and popular electronic and department stores such as Yodabashi Camera and Bic Camera, the Tokyo Animation Center as well as a radio hall with its 10 floors of toys, trading cards, and collectibles. The area is the living hub of Japanese subculture, powered every moment by the passion of the geeks within.

For more information on our Private Programs, please visit our page here.

NOTE: Students will need to cover the costs of food, travel to and from Japan, daily commute and travel within Japan, and any other personal expenses. We will also ask that all students obtain Emergency Medical Insurance before or by the time they land in Japan.

We aim to support all students who are interested in coming to Japan to study & live.
For this reason, we provide all of these services at not cost to you.

For free information & consultation about this and other schools in Japan